Because things must always stay “interesting”

So we left Silverton (with many tears shed by me), and moved on to Leadville. Oh wait, scratch that, headed to Denver to get me some new shoes. I have been hiking in super old New Balance 730’s (since I haven’t been running, I convinced myself I didn’t need knew shoes) and decided the lack of tread needed to be addressed before another crazy mountain and I met. So Denver it is with some delicious food mixed in for sure.

First stop was the super amazingly fancy REI. Seriously I think I’m going to live in this place. My plan is to sleep during the day in one of the kayaks and come out at night. Play dress up for hours on end while no one is there and eat some delicious food until the wee hours of the morning when I go back to my kayak home. Don’t tell so someone else steals my plan! Anyway… Awesome time there. Love me some REI and put a rock wall in the middle and I’m a super happy lady. No shoes for me here, on the next place.

Found a running store called Runners Roost and just grabbed some New balance 110’s. Not super stoked on them but guess they will work. We then headed to this little Thai place to grab dinner. I love me some Happy Cow (awesome website dedicated to helping you find Vegan grub) and especially love little hole in the wall restaurants they bring us to.

So we hit up this super cute little place and ate vegetables, yes VEGETABLES! Being in Silverton for over a month where everything straight from a plant is super expensive it was so nice to gorge ourselves again. On to the point, as we ate we noticed Tru was not using his left arm. His water was in the fairly large Styrofoam cup and he needed help moving it to his mouth. No amount of prompting or bribing could get him to use it. Damn… after finishing dinner (where we were of course praised many times for how well behaved our kids are) Seth and I tried playing with him outside. Poor little boy cried because he couldn’t use his arm to get up from a sitting position. Hospital time it is.

Luckily we live in the awesome ultra running community. We had two great ladies willing to come to a random hotel and watch our bigger four so Seth and I could take our sad little man to the hospital.  We chose the awesome Lady closest to us (thanks Shawna!) bid and hasty goodbye to the other four, and headed out after 9pm to the children’s hospital in Aurora. Apparently it’s a popular place at that time.. ugh…

A digression- We lovingly refer to Tru at home as “Drunk Frat boy” because:

-His speech is slurred, if you can understand him at all.

-He often wanders around with only one shoe on

-He falls, balance is not his thing

-He wakes up in the gutter, well not really but often he throws tantrums that appear like he has

-He has random bouts with violent aggression

-He throws stuff, anything really

-He is a hot mess

See, Drunk Frat Boy. I mean, he is just making sure he is well prepared for his future as one. Luckily for him his drunk Frat Boyness will be at an Ivy League school, gotta make his Momma proud!

His first hospital bracelet for an injury!

So alas, Seth stayed with us at the hospital until Midnight then headed back to the hotel to let Shawna go home. Tru and I continued to wait as his serious hoodlum behaviors came out. Really kid? It’s MIDNIGHT!!! Even without the use of his arm he managed to be a crazy little guy. Eventually we got called back. The doctor diagnosed it at Nursemaids elbow (which we had assumed), and moved his arm around putting all those silly ligaments back into place. Nurses came in to check vitals again and Tru was not having it. Apparently at 1am after a doctor has just caused you great pain in is acceptable to kick nurses… sigh… I honestly just couldn’t be mad, poor little guy. So nurses left and it took FOREVER for the doctor to come back. Someone please explain to my why a CHILDREN’S HOSPITAL does not have everything child-proofed? I was exhausted and could not close my eyes since this little guy was running in circles opening every drawer.

Mom this is serious! 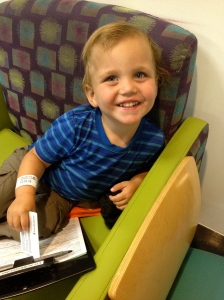 Isn’t it funny how you question things as they are happening but they don’t make sense until after?

At REI I had put Tru on a bear statue with the other kids. Normally this would be a fun activity, but he kept crying whenever Tay would put his arms around him. This Mommy thought “goodness why is he being such a punk right now?”

Tru not having fun.

As we got out of the car at REI Seth pulled Tru out of his car seat and set him on the step of the van, like normal. I remember Tru crying and grabbing his arm. Again I remember thinking “Why is he being such a punk?”

So as Seth pulled him out something was funky and his ligaments in his elbow got all pulled out of whack. Nothing crazy happened, just another normal moment that for some reason went awry.

The best part of the evening was when the male doctor came in, Tru happily gave him a high five with both hands, and we were sent home. With the promise that this will probably happen again… I guess kid number 5 just wants some extra attention so we will find ourselves in a hospital room getting it popped back into place probably again and again with this daredevil. Yup, My Drunk Frat Boy had his first dislocated joint. Such a proud Momma! 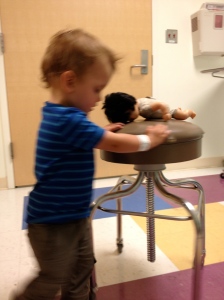 Best part about going to the hospital? You get to play with you sisters baby all night and no one stops you!

This is what you look like at 2:30am we you are FINALLY leaving the hospital! Guess he enjoyed his evening!