Posted on June 8, 2014 by sevenwildandfree

What did I do this weekend? Well crewed my +1 at a 100 mile race with my four littlest Littles of course!

Let me just say here, my +1 is a very talented runner. Not only is he talented, he has a no quit attitude everyone should be jealous of. I often spend my “free” time crewing telling people how wonderful he really is. Watching him race is always a mixture of pride, admiration, stress, anxiety, and joy. I love every minute of it! But enough about him (he can write his own report!) this is about ME!

We left Friday, late. Now mind you, we had ZERO plan, but I like leaving early in the morning and that just didn’t happen. We honestly just decided to head out around 10:45, with zero snacks, toys, music, or any other “keep the kids busy” activities. I am the Queen of road trips so this is very unlike me. Between leaving late and overall feeling terrible, I was off my game. I spent the ride sleeping, sternly informing the children of how I WAS trying to sleep, and passing them snacks when they refused to say quiet. Oh and freaking out at them to not make a mess since we were not in our van. Yup, I am a clean nazi at times. We arrived at the end of the pre-race briefing and headed to our camping spot.

Like I had thought, camping was way too close for comfort for me. I wouldn’t normally mind, but a bunch of people trying to get to bed early while my little hoodlums who have been trapped in a car or hours throw a tent party did not seem like a good idea to me.  I sent +1 to the tent for the night and the Littles and I took the car (no big deal really). We listened to music and chatted until way too late and finally fell asleep.  You know what is awesome? Being awoken at midnight to a toddler SLEEPING ON TOP OF YOU POOPING IN HIS PANTS. Yup, fully asleep and having terribly sick poop in his pants… perfect. Life? yeah, couldn’t be better. So I grab some paper towels and get to cleaning. Ugh… who needs sleep before crewing all day? 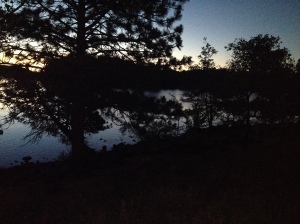 It sure was a pretty view to wake up to though.

We awake and head to the start. Nothing too exciting here… just a bunch of people heading out for 100 miles 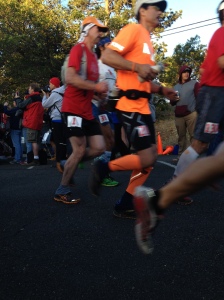 +1 is there somewhere. Photo by a 9-year-old that clearly is still asleep.

And off we headed back to camp. A spot the runners would come through but we could not crew from this time. The kids hung with friends, well except Tru… He got exiled to the car for a much-needed nap. See, here’s where I am a genius (actually not just here, I am a flipping genius always),  I bought an awesome baby monitor. Before our trip last summer I needed a way to leave the children in a place (car, tent) and walk a short distance away (locking said car AND with them strapped in their car seats). If anyone wants in (or out!) I will hear the car AND I can hear if someone in the car wakes up and needs something. So Tru napped, Bigs played, and I watched across the lake for +1. He rolled in, I waved, he didn’t wave back, and we headed to the next spot we could crew from. 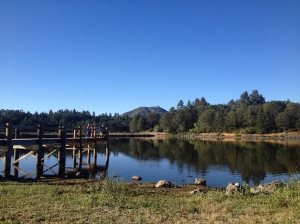 Kids and new friends. Life is good. so far…

I tried to nap, kids made a mess, I cleaned it up, gave +1 his two new bottles, he ran off, headed to the next spot. My head hurts… Oh the crew life.

The kids passed the time- 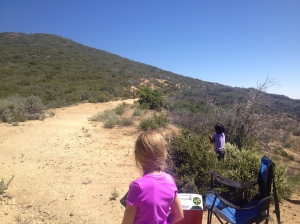 A little racing up mountains. 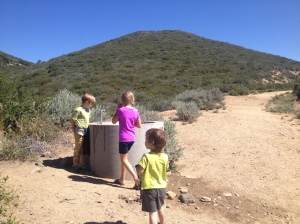 Oh and playing with nasty horse water. SAVE THE BUGS!

I should have offered him his ultimate direction pack with ice in it here, but I didn’t. I promised it at the next crew spot and sent him along. Moving on.

Now +1 can usually be found in the front of the pack at a race. I count on him being near the same people he has been so I can usually judge when he is coming in. Not only that, I can usually look at the distance and elevation (guessing terrain) and guess pretty well when he will be coming in. So when he was late, the kids were pissed. The questions, interrogations really, of when +1 was coming in, where is he, what happened, and WHY oh WHY is he not here yet?!?! began flooding in.

Tru falls asleep on my back 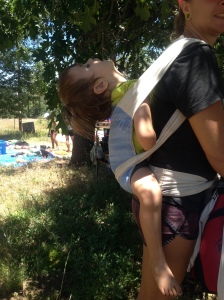 Tenny falls asleep on the pavement, basically in the runners way. 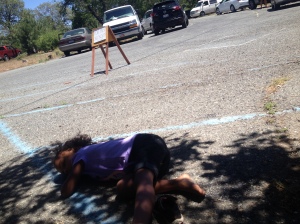 Tay who has been holding +1’s pack with ice like a diligent little crew man gives up, hands me the pack, and heads to play.

Oh shit I haven’t seen Tay in a while…send Tea to check on him… OH! There is +1! Tea come help!

He isn’t in the best of moods but also isn’t a disaster like I would have expected. I give him some caffeine, his pack, and food and send him on his way. Tay apparently was building an awesome fort with a friend he had met and was having a great time, thank goodness someone had fun on this stop! On to the next one, and some snacks., lots and lots of snacks.

More fun was had! Apparently sticks and pine cones make for a great crew game of baseball! 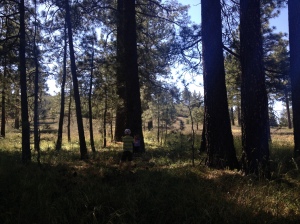 Creativity makes the time go by.

Next stop the kids saw their friends from camp and were super stoked to play for a few minutes. I started to notice +1 was making a move up but tried to not show my extreme excitement. The kids had a ton of snacks but were definitely showing signs of the long day. 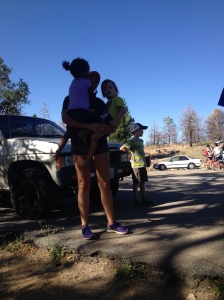 Somehow shoes became an issue. Crew lady and baby mover, I’m on it.

Back to our horse water/running up a mountain spot from before. We met some nice people who offered my kids a warm shower. Should I be offended or not? The Ladies decided to clean up their hands and feet a little and Tay checked out an awesome conversion van with a pop up. Tru wrecked himself- 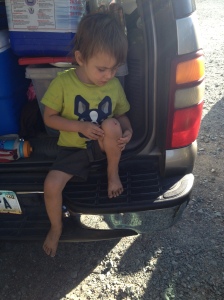 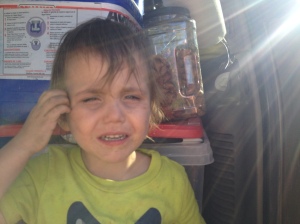 Tenny wrecked herself, and in all the waiting Tru fell asleep on me and +1 came in. Crewing with a sleeping baby in your arms is not so easy. Luckily he isn’t too needy and headed off.

One sleeping kid stayed sleeping, another fell asleep in my arms while waiting in the dark at the next aid station. Said Little Lady who shall remain nameless decided to awake from the dead (asleep) to scream, since clearly she needed to crew +1 and not sleep in the car. Look, it was dark and she fell asleep, I needed hands free. +1 had been slowly moving up and I knew that would only continue. Tea join her in the car, I spotted +1’s light coming in, Tay and I gave him what he needed and set him moving again as fast as we could. I was giddy inside with how well he was doing and that brought a new but of wind to my tired sails.

Now the drive to put everyone to sleep. I had one more spot (campsite) where I could crew him before the finish. For once this crewing journey I was alone and so happy to see my +1 roll in. He had an amazing couple miles and I could tell he was ready to race to the finish. I sent him off again, excited to have my day of crewing with kids coming to and end, and excited to see him finish!

I hoped back in the car…Oh shit, what’s that smell?? Oh yeah.. shit… So Tru and his *poop in him pants while sleeping* last night was special, but again tonight?!? Then it all makes sense, he REFUSED to use a non real bathroom all day AND refused to go outside. Ugh… does he know what family he is a part of?!?! Pooping outside is what we do! So now I find myself at a boat dock restroom in the middle of the night cleaning poop off a toddler I had to stir awake… luckily he was someone cooperative. Off we went to the finish!

Watching +1 finish was amazing. Not only did he wreck the second half (I told you he was talented), but I also managed to pull off crewing with 4 Little People in tow. YAY! Although exhausted from the day, they did (mostly) enjoy spending their day crewing (or is that just the promise of a beach day?).We all survived! With some cuts and bruises maybe, but we survived!

Let me just say it here, Crewing IS harder than racing. Yup that’s right, and I’ll say it to your face! I am tired, sore, and I’m pretty sure I could eat my weight in food. So now I’ll get back to letting the children watch TV while I *try to nap.

My life currently, in a panoramic photo.

Spent the last week with these guys far away from me running around on the beach having a blast- get to spend next week with them all at home... all day... But like- I should just go back to the beach, right? ~ ~ ~ #wildandfree #outdoorkids #adventure #beachtime