What kids do when they don’t have a screen to consume them.

At home (before this crazy trip) we did own a tv. Along with that, we have a computer, iPad, iPhones, and a Kindle. Obviously we are on the “less than” end in the electronics department, but I like that. We didn’t have cable but we did have a DVD player. When people watched our children they were usually welcome to turn on a movie or two and on some Friday nights the children had  “movie party” where they watched a couple of movies before falling asleep. We are music lovers so that has always been huge in our house. Dance parties are a regular event and at times they also watch music videos for some songs. Basically, screen time was at a minimum in our house already, but even so having no option is a pretty large change.

The oldest two are huge readers. Tajh, especially, is known to try to bring a book to the dinner table. This problem is so bad (yes I call it a problem!) that my plan to “just get you new books at the used book store on our trip” is not working. This kid will read a book OR TWO a day, and yes he can tell you exactly what happens in each book. So at this point he has resorted to asking his little sister to borrow her books, or waiting until she falls asleep and “borrowing” them. Ugh… Seth has actually allowed him to use the iPad to borrow books from libraries which I myself am highly against. The little ones as well enjoy reading and are happy to have any and all books read and reread to them a hundred times. So my kids are readers… rough I know…

So when they aren’t hiking crazy mountains, running awesome trails, or reading, what do I do with them? Don’t they drive me crazy? Don’t I need a screen to babysit them so I can “get things done”? Well… they are playing of course!

Yesterday a game of choice was football. Although we do have balls with us (not a football though) they used each other as the ball. They played this for a while, giggles at how silly it was, and eventually moved on to new and different things.

They talk about books. Its kinda funny to hear Tajh and Tea having read the same books discussing them and deciding to act them out. For a while our dog Baya was a horse from the book they had both just read and they were all different people in the story. On our last hike we found an old train car and they had a great time talking about being in The Boxcar Children books and who would be which characters. I remember reading them the entire Chronicles of Narnia series and them loving to recreate the entire story and even the little ones being part of the game. The great worlds kids can create after being inspired by books is ridiculous, and sometimes if I don’t get a character too I feel a little left out!

They play in creeks, simply that. They get wet, make bridges, throw rocks. There are no rules here which is perfect!

Yes he did fall in eventually! 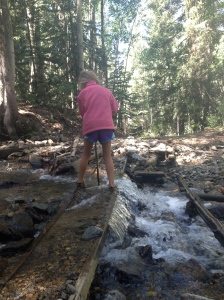 She was “ice skating”.

They build forts, and inform you its a “lean-to” not a house because that would have been more difficult.

Nicely built! Not that I’m bias or anything…

They get dirty, because kids are suppose to!

This baby is never clean, but still cute!

They play with their little siblings, and even decide to wear them!

Now most of these things to do will not work for helicopter parents. You have to be willing to take a step back and let the kids just be kids. I try to never give my children the ideas for their games, as I believe they are much better at playing than I am. I like to sit back and watch them create a new world, actively engaged with the natural work, being children. Basically if you have no read Last Child in the Woods By Richard Louv, DO IT NOW! Awesome thoughts on how we need to send our children outside, to learn to love nature. I’m going to pat myself on the back and say I’m doing a pretty darn good job!