Being an adult is AWESOME!

Posted on January 7, 2015 by sevenwildandfree

Mainly because you get to eat soup for breakfast. I mean seriously, is there anything more delicious then soup? On cold winter mornings who wants a cold bowl of cereal? We don’t even eat that around here! Although Capt’n Crunch is amazing… mmmmm… But soup! So warm and hearty!

So friends, Soup it is for me! Let’s also discuss the fantasticalness that is Cauliflower. I’m pretty confident in saying, cauliflower is the best food in the world. You can do anything with it! Mash potatoes, breakfast fritters, wings, poppers, the list is endless with this beautiful vegetable. 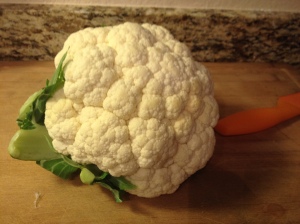 Lets remember, I don’t really measure, hate using a ton of ingredients, and love simplicity! So play around with it a little, but this is generally how I roll…

When it smells yummy and before it burns throw in the curry powder for a second, then add broth. I use-

Chop one of the heads of cauliflower and add it in. Cook until its tender enough to throw everything in the Vita-Mix. Blend until smooth!

Pour back into the pot, chop the other cauliflower, throw it in, cook until tender.

And Eat! I use a little salt at the end… but I might have a salt problem. Sometimes we serve it over rice, sometimes we don’t, delicious either way.

Best part of the recipe? Make double (or triple) and leave it in the fridge for a quick and easy snack! Mmmmm Breakfast!

Posted on October 8, 2013 by sevenwildandfree

Despite the fact that it may seem against everything I believe in, I love Halloween! I love the freedom to dress up, be creative, and to just have fun. The candy and ridiculous amounts of sweets and the scary stuff (I’m scared of everything) may be my least favorite parts, but as a family we throughly enjoy our Halloween traditions. 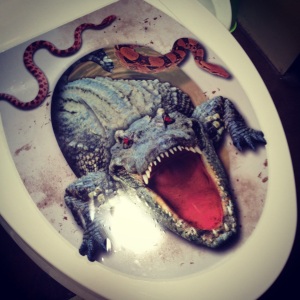 Even the bathroom is dangerous around here!

Today was Decorate and Super Craft Day! We made some tissue paper bats, painted some pumpkins, and visited the dollar store to get some cheap decorations. 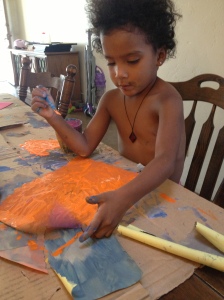 Shirtless painting is really the only way to go!

Sometimes super craft days can be overwhelming, tons of children all wanting to do things in their order and ridiculous messes to clean up. I find it easier to run my crafting time like a preschool. I set the schedule (sometimes allowing their input) and plan easier activities for them (today it was foam airplanes from the dollar store for them to play with outside) so I am able to set up for the next activity.

Outside fun to keep them busy while I set up painting time.

Another favorite part of Halloween is making food fun! Simple pesto pasta is always better when you call it Slime Pasta! 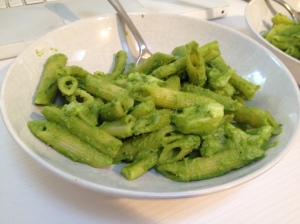 3 handfuls of Spinach (to make the awesome green)

Garlic cloves (I use 4, I love garlic)

Cup or so of Nutritional Yeast

A couple tablespoons of Olive Oil

Throw everything in the Vita-Mix (or blender) with just a little of the Cashew water and blend away! Remember to add some vegetables. While there is a ton of spinach in the pesto, pasta is a “filler food” for us and should always be supplemented with extra veggies. 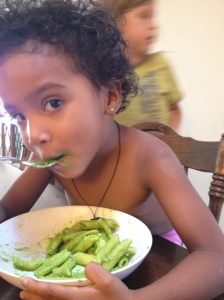 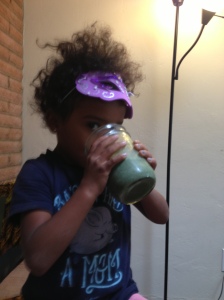 There is a lot of green slime around here today!

Remember– Messes can wait until later! Have fun making special memories with your little people now! 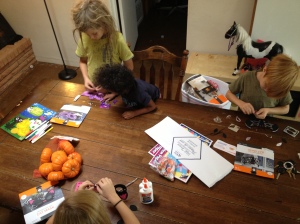 Posted on August 13, 2013 by sevenwildandfree

Bag of pasta (Fun shapes are better!)- cook that per package

A cup of water plus a cup of plain soy milk

Whisk this all together and try to make it smooth (never works well for me). Be patient and it will thicken up nicely! If you have any veggies add them in!

Hobo Style- Any leftover veggie ends (broccoli stalk) either yours or your friends, add it in! Cheese sauce makes everything better!

Mac and Cheese cooked van side!

<a href=”http://www.bloglovin.com/blog/9992403/?claim=mntabpbrunv”>Follow my blog with Bloglovin</a>